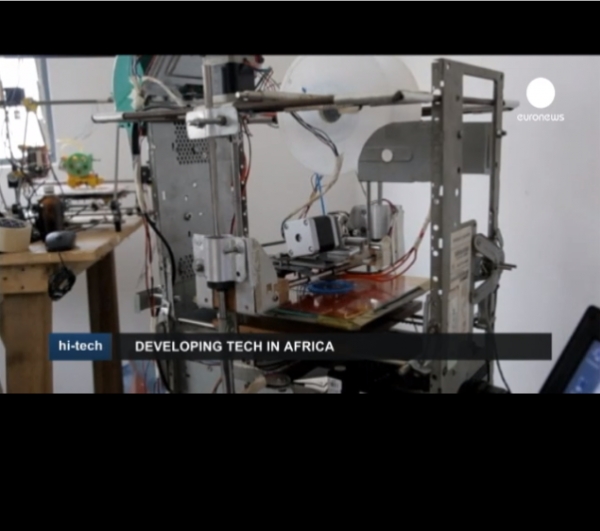 Using rails and belts from old scanners, the case of a discarded desktop computer and even bits of a diskette drive, he has created what is believed to be the first 3D printer made from e-waste.

It has taken him several months to put together his experimental device. Lifting designs off a computer, the 3D printer produces physical objects. He shows us by “printing” a small round container.

And it doesn’t stop there – the 33-year old says he believes this model is only the prototype for something much larger. His aim is to one day transport e-waste to Mars to create homes for mankind.

Some elements had to be bought new but, in all, his printer cost him 100 US dollars to build.

Gnikou says his printer can also be useful on a daily basis as it can print various utensils needed in any household, that are not always easy to get hold of.

Though some have called him a dreamer, his hard work has paid off as the young inventor has been rewarded with the NASA International Space Apps Challenge in Paris.

In an upmarket school in the suburbs of Nigeria’s largest city, Lagos, students are enjoying a whole new learning experience as they try to master local languages.

Globalisation means children are being encouraged to learn internationally spoken languages to the detriment of local dialects.

So, young software developer Adebayo Adegbembo has come up with a new application to help promote traditional language and culture. It comes with complete animation, voice and a virtual classroom designed to appeal to children.

He says he is on a mission to introduce the app to schools and parents – a strategy he hopes will help maintain Nigeria’s linguistic heritage.

“Our focus is on culture. Kids today are not that interested in learning about culture and know little or nothing about their own, so we’re making a small contribution in our own way, giving them a grasp of where they come from, identifying with their roots and regaining their cultural identity,” he says.

The app comes in Yoruba, Igbo and Hausa, the country’s three main languages apart from English.

It costs around 10,000 US dollars (7368 euros), however, and requires users to be equipped with smartphones and tablets, which is not a given in many Nigerian schools. This means its use has so far been limited to a handful of upmarket schools in Lagos.

Its creator says he is currently working on releasing more culturally oriented apps to cater for Nigeria’s diverse and rich culture.